Firth PaveWare® used to tell a story at historical site 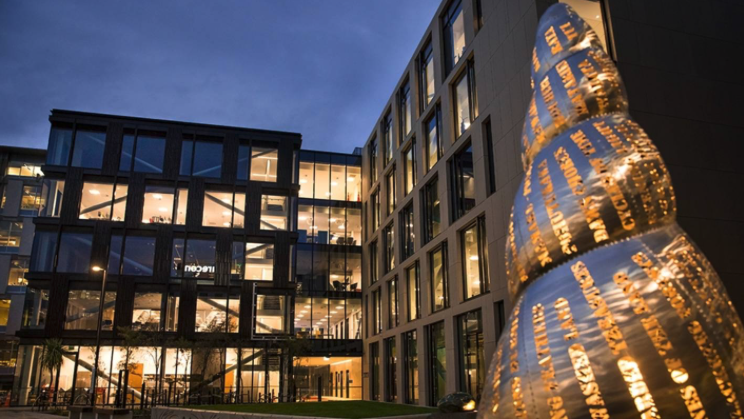 The two L-shaped office and retail buildings, Te Uruti and Iwikau, stand side by side with a small alleyway between them leading into a peaceful open garden area, Ngā Māra a Te Wera, designed by Kamo Marsh Landscape Architects. The garden features paving from the Firth PaveWare® Commercial Paving range used in a pattern inspired by Kaokao, a traditional weaving pattern. This pattern is associated with ‘the departure to battle’ and holds great relevance to the history of the site as departure points for Māori and European battalions.

“The creation of a shared outdoor space that provides a welcoming and comfortable environment for tenants and visitors was an important aspiration for this project and a key part of our brief,” says Bridget Robilliard, Registered Landscape Architect for Kamo Marsh Landscape Architects. “Expression of the site’s many layers of history and past, and its present values, was important in the development of the design. We worked closely with a Ngāi Tahu artist to create a sophisticated landscape that represents Mana Whenua associations and values of the site.”

Bridget says that the environmental impact of the site was carefully considered with a complex stormwater treatment system incorporated into the garden design. Planting species were also an important part of the expression of the site’s history and identity, with species being those that would have previously existed in the area, that would have provided resources and fauna habitat or have social connotations to historical events. “Firth’s range of durable outdoor pavers were the perfect product for creating a space with a high quality finish that continues to look good with heavy pedestrian and vehicle use,” she says. “The paving design is important for the user experience, helps with the division of space and highlights key access routes. The ability to use the materials in decorative patterns allowed us to weave in elements of story-telling into the hardscape.”

“Having worked with Firth products in commercial developments in the past we know they are durable and will continue to look good following heavy use while providing safe surfaces for the end users.”

The park also includes a number of commissioned artworks in keeping with the site’s historical links and *Mana Whenua values.

The development borders the Ōtākaro (Avon) River and is of significant cultural and historical value. The site originally sat on the edge of the Puari Pā, an important **Mahinga kai and kāika nohoaka on the banks of the river. It was also the location of the old King Edward Barracks where soldiers trained and left for duty in both World Wars. Since the 1930’s there have been two police headquarters on the site, the most recent Christchurch Central Police Station was the former headquarters of the Canterbury Police District. Once the tallest building in Christchurch, it was damaged in the 2011 Christchurch earthquake and demolished by implosion on 31 May 2015.

The development has adopted the latest earthquake technology. One building is base isolated, while the other has a buckling restrained bracing system. Both Phase One buildings have photovoltaic panels on their roofs to generate power for the complex. Both buildings are Green Star rated, as well as holding NABERSNZ energy ratings. The carpark includes state-of-the-art parking for bicycles and charging facilities for electric vehicles, license plate recognition and red/green way finding and parking technology. The proposed Phase Two will include two more office buildings and Phase Three comprises 70 apartments; however these still require further design and are subject to testing of market demand. Unusually for a commercial development, the whole site will enclose the urban park, Ngā Māra a Te Wera (The Gardens of Te Wera).

*Mana whenua refers to the right of a Maori tribe to manage a particular area of land.

**Mahinga kai refers to Ngāi Tahu interests in traditional food and other natural resources and the places where those resources are obtained.