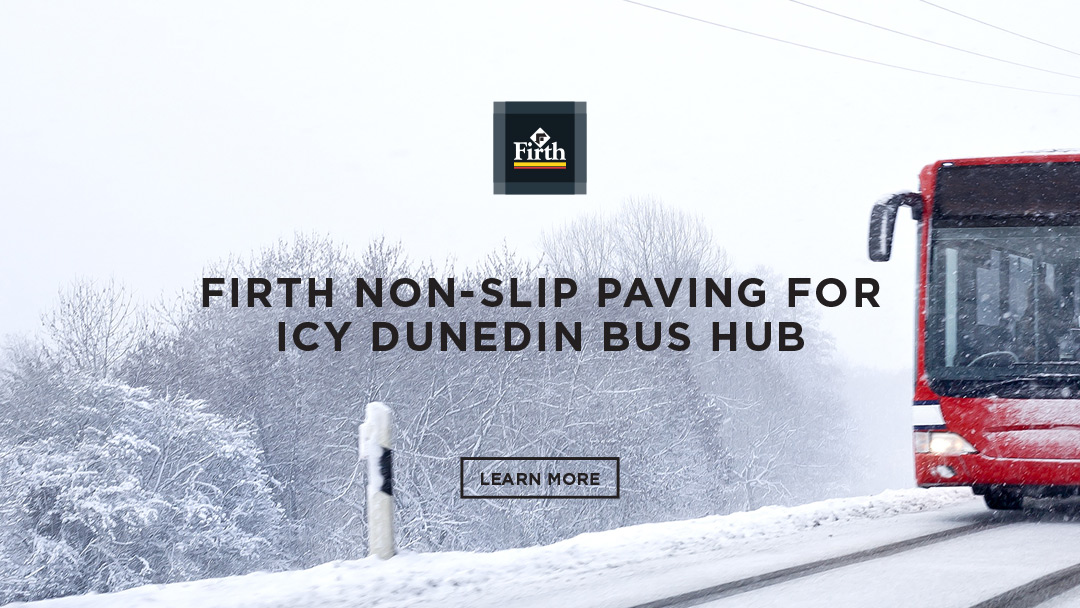 The ongoing development of Dunedin city took another step forward this year when the new Dunedin Central City Bus Hub was officially opened to the public in March.

The $5.4 million project has delivered a new terminus and interchange within the heart of Dunedin CBD with the landscape and urban design for Great King Street providing feature paving (from the Firth PaveWare® Commercial Paving range), canopy structures, furniture and lighting which has all contributed to a very attractive and unified public space.

“The new hub was designed for the pavement patterns to indicate movement areas and congregation zones across the widened footpath area,” explains James Taylor, Project Manager for Beca. “Vehicle crossings to adjacent carparks are rationalised and have been lifted to footpath level to slow traffic movement and emphasise the hierarchy of pedestrians over vehicles in this space.” “The various areas of paving in the hub include Firth Holland® Set in Black Sands and Piazza® in both Natural and Black Sands,” says Peter McCartney, Sales Representative (Coastal Otago & South Canterbury) for Firth. “It was decided to use a Bush Hammered finish to create natural grip for the everyday pedestrian to avoid the surfaces becoming slippery in wet weather.”

“Firth PaveWare® Commercial Paving has already been used in various places around the city and with a good range of colours, sizes and finishes available we were able to select, through our consultant Beca, pavers to direct pedestrian traffic and offer some interest,” says Julian Philips, Team Leader Public Transport Dunedin, Otago Regional Council. “Also the Bush Hammered finish of the pavers offers a rougher finish which was of interest to us as Dunedin can at times have icy pavements and this rougher surface should help reduce the risk of people slipping.”

Philip Morrison, Civil Engineer for Beca on the project, says work included the Dunedin City Council (one of the three agencies that make up the Connecting Dunedin Partnership) replacing a large water main running the length of the Bus Hub.

“A factor which affected the timeline was the very poor ground conditions being worse than anticipated,” says Philip. “The carriageway pavement needed to be redesigned, with a concrete base for the asphalt.” “The new facility looks fantastic. It is a great asset to the city,” says James.

With plans for Dunedin’s new hospital underway less than a block away the upgrade to Dunedin’s transport hub will add to the efficiencies of public transport in the city and support the new facility, which will replace the existing Dunedin Hospital and be the single largest hospital build ever in New Zealand, with estimated completion in 2028 and a cost of $1.4 billion.

“We are very pleased with the final result,” adds Julian. “The hub represents one of the biggest recent investments in public transport in Dunedin and will build on increased public transport usage in Dunedin, lifting usage to the next level.”