Perfect timing for Sky Waka opening as the snow arrives 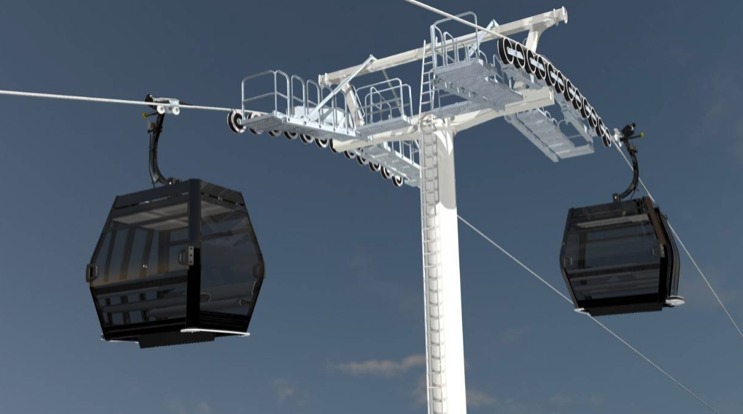 Snow buffs were treated to a spectacular opening to the ski season at Mt Ruapehu this year with the snow arriving on queue and the mountain opening their new Sky Waka Gondola in early July under clear blue skies.

View a video of the Sky Waka in action

Construction started on the new $25 million gondola in November 2018 with just an eight month construction window for the completion of New Zealand’s longest and fastest gondola, in time for the expected opening of the 2019 season. It was going to be a big ask.

Simon Murrell, Site Manager for Leitner Oceania - the supplier and the construction company building the 1.8km, 50 glass cabined gondola for Ruapehu Alpine Lifts (RAL) - says the target from the beginning was to have the new lift running for the upper mountain opening around the end of June.

"Due to the unique geographical location of the site and the rock composition, the construction design requirements did evolve daily as work progressed. The lack of access added to the complexity of the project,” says Simon. Getting concrete to the foundations of the 14 steel towers that are scattered over the mountain and which would support the 50, 10 person cabins would require plenty of ingenuity and a supplier that could provide that volume out of a reasonably remote part of the country.

“We entrusted Firth with supply as they have a plant in Turangi which is the closet to the mountain and they are the best equipped to support the volumes of concrete we needed,” says Simon. “In saying that it was a big ask for a small plant to produce a total of 1200m3 for all the foundations in just a few months.”

With the ability to pull resources from other locations Firth were able to use trucks when required from other plants. “Firth Turangi is a small plant with just two full time people based there,” says Rob Mulder, Area Operations Manager (Waikato) for Firth. “Initially our Taupo pant heavily supported the Turangi team but as the project picked up pace three extra trucks were brought into Turangi from other areas. We also had staff from the South Island come and stay in Turangi for up to 3 weeks at a time to drive the trucks - just for this project.”

Rob says that other Firth Waikato sites such as Tokoroa, Te Awamutu and Te Rapa also provided support and resources on a regular basis. He explains the complexity of managing the concrete delivery for the project in this challenging environment.

“It is a 50-60 minute travel time from the Firth Turangi plant to the top of Bruce Road and then the concrete needed to be delivered up the mountain,” explains Rob. “There was no suitable, safe road access so we could not use a pump. Access was only via a narrow rocky track meaning load sizes were restricted to just 4.5m3 because the concrete would fall out the back of the bowl, due to the incline, if it was too full. Simon and his guys did use a helicopter at times but the majority of the concrete was delivered to the various sites by a small mixer bowl connected to the back of a tractor.”

“Only able to hold 3m3 per trip, depending how far up the mountain the concrete needed to go, it could take from 30 - 40 minutes to return to the truck for the remaining concrete.”

Simon and his team installed a 1.1km material rope-way on the mountain which they say is the first of its kind in New Zealand. It is a system of ropes, between four towers, that winch large buckets of concrete further up the mountain from the delivery point to the necessary location. Simon says that his team averaged about 50m3 per day to the tower locations with largest pour undertaken in one day, above the base station, of 106m3 - with the help of the helicopter and the ropeway system. The largest pour in one day was still limited to 136m3 for the Drive Station using the crane and skip.

View a video on how to get concrete up a mountain!

“It was always going to be challenging constructing this facility in such a short timeframe under challenging conditions,” says Simon. “Firth did really well to support us and were flexible when we needed them to be. We all worked out the best way to operate and we all got into a rhythm - it all went really well.”

“My team did an amazing job and we were only one month later than expected for the opening which worked in perfectly with the arrival of the snow - which is what it’s here for after all.”

The new gondola is a huge asset to the region as a tourist attraction. It has created an extra 137 full-time jobs at Whakapapa in the restaurants, maintenance, sales, retail and transport teams. RAL expect it to bring 300,000 visitors annually to the mountain, including people that don't ski and will visit the mountain for its spectacular views. At peak times it will transport 2,400 people per hour over the 1.8km in approximately 5 minutes. The gondola will be a revolution for skiers with fewer closed days, improved performance on windy days and a blistering fast trip travelling at six metres per second.